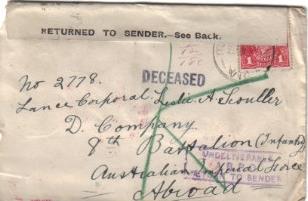 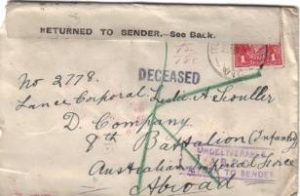 The saddest times of the war were when families received notification that their loved ones had been killed. Letters were the only form of communication between soldiers and family and often the first inkling of a soldier’s death was when the family didn’t receive replies to the letters sent to him. This could cause months of worry before confirmation one way or another was received.

“It was with a very sad heart I read Ivy’s intimation of poor Leslie’s death. I had greatly feared something of the kind for about two months before. I had written several letters and had no reply and that was so unusual for him, but they were not returned and I still had a hope that whatever was wrong it would not turn out so serious as it has done.”

(Extract of letter to Elizabeth Scouller from her cousin)

Sometimes the first intimation of a soldier’s death was a returned letter marked “Deceased” and “K”.