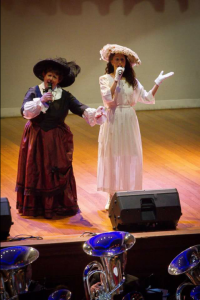 Four archetypal characters, The Mother, The Soldier, The Girl and The Poet face their sternest test during the dark days of the First World War. Will their courage, resolution and faith stand the test of war and bring them through the conflict? A story of loss, sorrow and, ultimately, the forging of a legend.

Through the fates of war these archetypal characters form a connection that explores the full impact of war on both the participants at the front as well as the people at home. The show reflects the experiences of the characters through song, poetry and music as well as using the visual elements of historical WW1 photos as a backdrop.

The show depicts events from the opening of the Gallipoli campaign to the final months and represents the experiences of many of our WW1 soldiers and their families. The show has received much critical acclaim from both audiences and the theatre press.